Hyperfocus? Hyperfixation? What’s the difference? What do they mean? And are they strengths? Or a weakness? Can they be useful? Rick talks about his own experience with hyperfocus at work and play, getting in the zone, locked in on what he’s doing. He also demonstrates his own personal hyperfixation of 50 years.

HYPERFOCUS vs HYPERFIXATION
WHAT’S THE DIFFERENCE?
You may have noticed two terms, being bandied about a lot lately, Hyperfocus and Hyper-Fixation. Or you may not have noticed, because you were hyperfocused on other stuff. You are a busy person. Several Patrons have asked…“What is the difference, if there is one, between Hyper-focus and Hyper-fixation.”

Good question! I found a variety of definitions. So it is confusing. Some claiming it’s the same thing with different names.

So, here’s my take. This is the difference according to the Ricktionary… This may or may not add to the confusion.

First Hyperfocus, which I know well. I start something and hours pass, and I am oblivious until my stomach says, “I’m empty!” Or my bladder shouts, “I’m full.” Paradoxically, paradollicos paradoxical… Oddly enough, when I’m not in a state of Hyperfocus I can be quite the opposite: mind wandering, easily distracted, zoned out, tuned out. And yes, I may look like I’m listening,… I’m lost in thought. Or thoughts. Mind racing. Hop skip and jump. Here, There and Everywhere… (MORE THOUGHTS).

And yet, as I say, sometimes I can be Hyperfocused. This is important because people will dismiss a child, or adult who is distracted, “You can focus just fine when you want to,” They’re right. Kinda. Sort of. Often mostly. Yes…I can focus, even Hyper-Focus on something that interests me… Even when there is a slew of urgent stuff I need to get to. Stuff I may actually want to get to. Or, have to do.

I’m a bit like Goldilocks, although I wouldn’t casually breaking into bear’s dens, without knocking. But I get her quest to find the chair that’s not to hard, not too soft, the porridge that’s just right, and then needing a nap, but unable to rest unless the bed is just right.

My attention can be too little… Or way too much… Or, once in a while, just right. Then I’m in the zone. But sometimes I’m hyperfocused whether I want it to be or not. Unlike Goldilocks I can’t just switch to the next bowl… it’s one more, then another… and another, and one more. Then hyperfocus isn’t a quirk or a strength, it’s a weakness, exploited by social media, and interfering with my life.

In other videos on procrastination we’ve looked at how anyone can struggle to get started, to focus on what needs doing… and yet, with other tasks, starting is not problem. We can slip into hyperfocus very quickly.

Think of someone practicing a sport they love, a musical instrument, playing a video game, drawing, even for some people, paperwork or planning… Their minds are engaged.

For me, it happens when I’m onstage in front of a crowd….or alone, building a miniature world. I’m lost to the world hyperfocused whether I’m building for myself or for others. I spent hours focused on building models for a local railway museum, but kept forgetting to keep track of my hours so I could invoice for my time.

Or, I might start writing a television script and get locked in, for hours and hours… Which is great. If it’s the script that I’m supposed to be working on.

Hyperfocus can be useful… when I’m doing the right thing. Unfortunately, I easily latch onto something trivial, irrelevant, but interesting to me, and never attend to what is urgent, important, but for some reason doesn’t interest my brain. It’s a challenge to become interested in something that doesn’t interest you. Would you like me to talk about Model Railroading for 3 hours? See.

It’s difficult to “choose to be interested,” about something. Why? What’s going on? On a neurochemical level, a task or idea doesn’t trigger the Dopamine, Norepinephrine, these neurotransmitters that give us get up and go! And it’s ongoing. The more we do something, the more the neural pathways grow and strengthen and link to other neurons.

As a kid I always worked on my model railroad rather than homework. I could hyperfocus on trains for hours. Days. Of course, that was then, I was just a child. Today, when it’s time to do boring tasks like paperwork, I go and work on my model railroad. 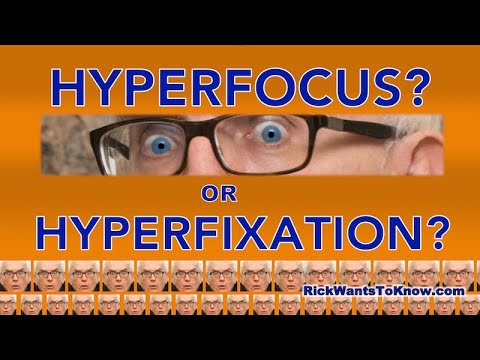