Do suspect you have ADHD, but you don’t know for sure because you have to wait months for your diagnosis? Angela, Eric’s guest, is still waiting for her diagnosis. Eric and Angela talk about the difficulties she faces in balancing family, school, work and dealing with Fibromyalgia and Migraines.

Angela relates how her son’s behavior gave her flashbacks of her own childhood and led her to look into ADHD. She also talks about her migraines throughout her life, and how it was difficult for her to find the right medicine because her parents were not trustful of doctors. Angela discusses what Angela goes through when she wakes with a migraine. She also explains the steps she takes to ensure she can continue to function in her busy life.

Did you choose a major when you were in college? Or did you switch between them multiple times? Angela talks about her college journey and how she finally found psychology her passion. Angela also talks about her Fibromyalgia diagnosis and her pregnancies. She then discusses returning to school to complete her graduate degree. And why she will not stop until she does. Angela talks about how important it was to her to know as much about ADHD as possible so that she knows what to do and how she can help her son if she is given the diagnosis.

Angela is a strong and determined woman. She has overcome a lot of challenges throughout her academic career but has never lost the will to finish what she started. Angela’s strength and determination should be celebrated. Maybe listening to her story will inspire you to finish something you never thought possible.

You’ll Learn: [02: 44] Angela, welcome to the show! [03: 40] Angela shares that she has been waiting since October for the evaluation to diagnose ADHD. [04: 27] What triggered the thought that you might have ADHD? [07: 02] Angels speak about her family not really believing in doctors and dealing with migraines without proper treatment. [09: 04] Angela chats about her sensor sensitivity and how it can sometimes be overwhelming. [11: 20] Angela describes how it feels when she wakes up with a migraine. [13: 09] How do you get up every day knowing that one of these episodes can knock your whole day off-kilter? [15: 58] Angela shares why she has her drive and grit to succeed and doesn’t let anything stop her. [18: 00] Angela chats about being able to sing opera and what caused her to lose the joy of singing. [20: 30] She speaks about how hard the decision was to quit singing. [22: 50] Angela says that singing didn’t fulfill her, and she felt like she was preparing to make other people happy when she didn’t care about it at all. [26: 43] Angela describes all the different majors she chose at the University of Oregon. [29: 15] Angela shares what made her get into psychology. [32: 44] How long has it taken you to get through the undergrad years in college? [35: 00] Angela speaks about her grades and having incompletes which kept her from graduating in 2010. [36: 54] She started taking pre-reqs for nursing in 2014 while pregnant. [37: 41] How was your pregnancy with all of your sensory sensitivities? [40: 34] Angela shares that two years after her son was born she went back to the University of Oregon for psychology and has almost finished her degree. [43: 01] Being a stay at home mom left her feeling unfulfilled because she had things she wanted to do. [44: 43] Angela shares when she was diagnosed with Fibromyalgia. [46: 31] Angela describes what having Fibromyalgia feels like. [53: 00] What was the tipping point that made you want to seek out an ADHD diagnosis? [55: 14] Angela says that her life has a bunch of pieces like a messy puzzle. [57: Angela discusses her job as a coordinator for a neuroscience program and the time it takes. [59: 13] Angela started reading about ADHD and it resonated with her. [1: 00: 19] How has the experience been for you as you learn more about ADHD? [1: 03: 03] Angela speaks about the struggle she faces going back to school for her graduate degree. [1: 04: 52] Angela shares that she let her professor know the issues she was having and her waiting on the ADHD diagnosis and his lack of response. [1: 07: 10] They discuss how nervous she was to come on the podcast and talk about her possible ADHD diagnosis. [1: 10: 10] Eric acknowledges Angela’s grit and tenacity to keep going to school even though it has taken many years. [1: 12: 36] Are you someone who appreciates harmony and beauty? Are you someone who can solve problems? [1: 13: 09] Angela, thank you for sharing so much with us! [1: 15: 20] Eric believes that everyone should make their mess their message. [1: 16: 46] Angela, do you have anything else you want to share with the listeners? [1: 19: 27 ] If you’re a regular listener, consider becoming a patron and on our Patreon at www.ADHDreWired.com 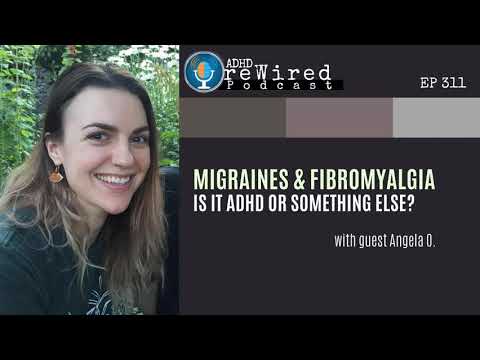